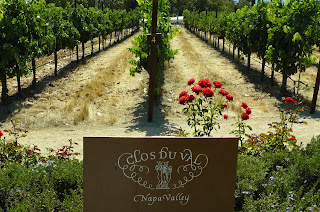 Getting a winery tour or tasting can be difficult with some wineries requiring reservations up to 3 months in advance! Fortunately, many have tasting rooms that don't need any such thing. Driving down the road, you just look for the little A-board signs sitting by the roadway, inviting you in for a taste.

Clos du Val was once such winery. I've had their wines before and vaguely remember enjoying them. The hostess was a very friendly sort, although she did ask me for ID to prove I was old enough to drink. Let me tell you, she made my day!
Clos du Val was set up 35 years ago by the Frenchman Bernar Portet. His mission was to produce classic estate-style wines and to that end, I think he has succeeded. I tasted and bought the 2005 Cabernet Sauvignon and the 2005 Merlot.
The 2005 Napa Valley Merlot is a Bordeaux blend, as are most of the wines from Clos du Val, primarily merlot with a bit of cabernet franc and cabernet sauvignon added to give it structure and balance. California merlot can be flabby and jammy but this blend was most definitely not. Pleasing aromas of plum and blackfruits, a rounded, full bodied mouthfeel and juicy blackberry, licorice and sweet spice flavours. Well balanced acidity was another big plus along with a nice long finish. A smoothly elegant merlot to have on it's own or with a meal. 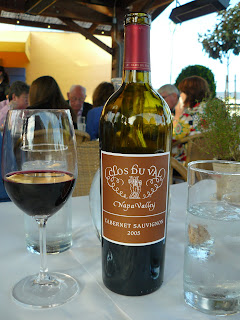 The 2005 Napa Valley Cabernet Sauvignon is a classic Bordeaux style blend of cabernet sauvignon, cab franc and merlot. It's big and meaty with plenty of tannins in there to help it age gracefully. Lots of currants, blackberry and cassis with a generous bit of spiciness and cedar to finish it off. One of the perks of dining out in Napa is that all the restaurants allow you to bring in your own wine for a reasonable corkage fee (usually between $15 - $20). I took one of my purchases with me to dinner at the riverside restaurant, Angele. An unpretentious French bistro serving up tasty French classics. I opted for the cassoulet. The sausage and duck were perfectely cooked, the duck falling off the bone and the sausage nicely spiced. The cab was a nice foil, standing up to the spicy sausage and the fruit shining through (but not overpowering) the duck.

I really enjoyed the elegance and finesses of the Clos du Val wines. There was none of that in your face fruit bomb that happens so often in New World wines. Although I should have saved the Cabernet for a couple of years, I don't regret having it for dinner that night.

A swing by Napa Valley 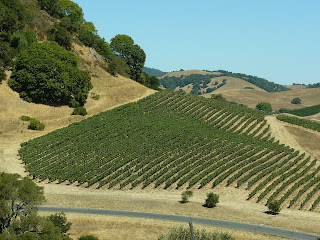 Since I'm out on the West Coast visiting family, I thought it would be nice to take a short trip over to Napa to do a bit of compare and contrast with European wines.

First stop was Darioush Winery. A rather OTT sight greets you as you turn off into the driveway. A forest of Persian columns topped by tw 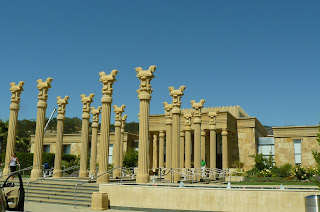 o headed horses leads the way to the entrance. The interior is all cool marble and glass dominated by a large square tasting area. Darioush is known for their shiraz but I was more impressed by their 2007 Signature Viognier. The grapes were all sourced from the Oak Knoll appellation which has a reputation for cooler temperatures and higher humidity then the rest of Napa Valley which preserves the aromatic components of the grapes. A perfect showcase for the aromatic viognier grape.

A swirl of honeysuckle, jasmine, white peach and cantalope leap from the glass and greet your nose first off. I could have sniffed this wine all day long, it was so pleasingly divine. That nose leads off into a mouthful of succulent, juicy white peaches and cantalope with hints of green apple and a citrus finish, nicely balanced acidity leaves you wanting another sip. I bought a bottle of this one to take home with me. 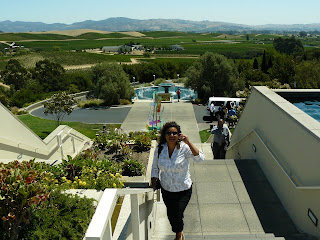 Another winery that I really enjoyed was the Artesa Winery in Carneros The winery is situated on a hilltop and has various pieces of sculpture scattered around the grounds.

Artesa is a subdivision of Codorniu but since 1999 they have specialized in red wines. They did have a fume blanc but I'm not a big fan of oaked S. Blanc. 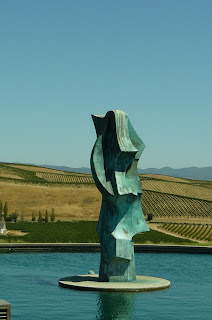 Artesa is producing a limited release of that Loire classic, Cabernet Franc. The grapes are from the mountainsides of Alexander Valley which has rocky soils and gets plenty of sun. The grapes were hand-harvested and no detail was overlooked in the winemaking process.

We sampled the 2005 Cabernet Franc Limited Release. A juicy nose of raspberry and cassis mingled with cloves and spice on the nose. On the palate, it was rich and dense yet fruity with lots of smooth tannins, a slightly smoky, spicy berry delight. A lovely elegant version of cabernet franc. 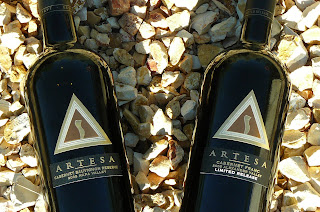 The last wine we tried was their 2005 Napa Valley Cabernet Sauvignon Reserve. California is known for their cabs so I had to give it a go. These grapes also got lots of extra special attention both in the vineyard and during the winemaking process.

It was a beautiful California Cab. with plenty of bouncy raspberry, cassis and blackberry fruit. It was well made with none of the jamminess that is too often a hallmark of California wines. The oak was well integrated with aromas and flavors of nutmeg, vanilla and chocolate. The wine wasn't flat or flabby either with a good sense of acidity and smooth tannins. I found the finish to be more fruity goodness with a dash of chocolate to round things off. The host told us that this wine could age for another 10 years but I think it's plenty ready to drink now.

All in all, some fabulous finds out there on the California wine trail.
Darioush 2007 Signature Viognier (rrp $39US)
Artesa Cabernet Franc Limited Release (rrp $40)
Artesa Cabernet Sauvignon Reserve (rrp $40)
All available on-line
Posted by winesleuth at 8/08/2008 07:21:00 pm No comments: