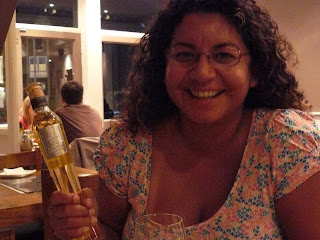 I'd like to thank the academy...(me and the Tempus Two)

So, continuing on with my dinner with Ana and Nigel. By now, we were done with the food and moved onto a straightforward Chilean sauvignon blanc because somebody had brought it and we couldn't really leave it there all by itself in the bag, now, could we? 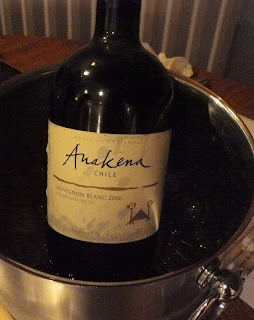 The Anakena 06 Sauvignon Blanc from the San Antonio Valley was a typical offering from that part of the world. Tropical fruit nose, a slight grassy-ness mingled with asparagus and the aromas of stewed gooseberries. On the palate, loads of starfruit and pineapple with notes of bell peppers and a softness in the mouth that you just don't get from those sometimes bracing NZ sauvignon blancs. It was much more subtle with a pleasingly long lemon-lime finish. We thought it would go down well with seafood like fresh oysters or poached salmon.

But that wasn't the end, nooooo, somebody (ok, me) had the bright idea of popping next door while Ana, the voice of reason, was in the ladies room (this is where The Wine Rack comes into play) for a dessert wine to finish off a wonderful vinous evening. I didn't have high hopes but The Wine Rack has a much better selection then the old Threshers it replaced. And, lo and behold, they had a Tempus Two Botrytis Semillon dessert wine from the Hunter Valley. Nigel gave us a bit of history o 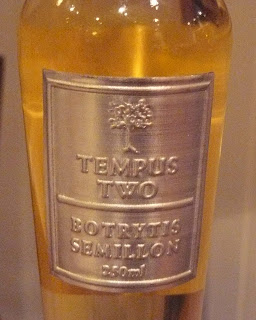 n the winery since he had visited it last year. The winery is owned by Lisa McGuigan, one of the few Australian wineries conceived and run by a woman. The Tempus Two winery is famous for their annual concert season where big names such as Elton John and Rod Stewart perform for the entertainment of the grapes (and the 10,000 people in the winery amphitheater paying big bucks to hear them sing). They're also known for their unusually shaped bottles, an example of which is at the top of this blog.

El Dorado is what I would call this wine if I was naming it - a ripe, warm, bright, golden hue. A swirl of honey, marmalade, orange peel, aged pineapple and a whiff of white grapes tempted our olfactory nodes. Now it was the tastebuds turn - dates upfront then dried apricots and honey coming thru finishing off in a crescendo of orange marmalade and raisins trailing off into a lingering finish. It was rich but clean and fruity, full bodied with excellent acidity to get us ready for the next wave. Mouthwatering!

The staff saw that we were enjoying our wines so much that they gave us all a shot of plum wine as we tottered off into the night. I think I'll be visiting them again soon. And the food was good, too!

Your blog is awesome!