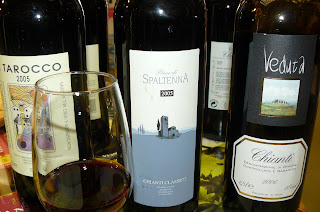 Chianti. Cheap and cheerful, comes in a wicker covered bottle, which, when empty, make handy candle holders. Well, that might be the old image of Chianti, and you can probably still buy that type of wine, but last weekend we had a tasting of Chianti Classico at the shop to dispel those hoary old myths and a bit of food and wine pairing with Italian salami and mature English cheddar.

Chianti is the name of the region in Italy where the wine is from, not the name of the grape. The Italians like to confuse us as much as the French when it comes to naming their wines. There are two types of Chianti, Chianti and Chianti Classico (click here for more info). Chianti Classico is the oldest region, located in the heart of Tuscany. Chianti is made up of primarily the varietal sangiovese with the local varieties canaiolo and colorino also used in the blend. Up to 20% can be added in Chianti Classico and 25% in Chianti. There are all sorts of rules and regulations governing the production and making of Chianti (click here if you're really intereste

d) but I'm going to focus on the three we had on Saturday.

First up was a Chianti, for a bit of compare and contrast, the '06 Veduta, a blend of sangiovese and canaiolo, spending 3 months in large oak barrels, produced by the Casa Girelli, one of Italy's largest privately owned wineries who produce 95% of their wine for the overseas market. This was an easy, approachable red, a simple, uncomplicated, red fruit nose followed by bright cherry and lively tannins on the palate. It had a short, slightly green finish. A good guzzler to go with a cheesy Saturday nite pizza.

ed onto the Classicos. What a world of difference. Everyone who tried the Veduta liked it until they tried the Classico. Piave di Spaltenna '05 was the first classico. The vineyards are situated in the heart of the oldest district in Chianti, Gaiole and it's 100% Sangiovese. This wine was matured in oak and aged for 6 months in bottle before release. A deep, intense garnet colour, the nose was an enticing display of sandalwood, spice, and oak with fruity cherry at first in the background and then moving onto the forefront after a bit of time. The palate was bursting with ripe cherry, hints of spice and well rounded tannins. A velvety concoction rolling around my tongue with a long, cherry-chocolate finish. It was a good match for the salami, marrying well with the spiciness of the meat and cleansing the palate leaving a lovely cherry finish. A real keeper but the best was most definitely the last, in my opinion.

The Chianti Classico Il Tarroco '05, what a powerhouse of a wine. A perfect example of how complex and exciting Chianti can be, this is a blend of 90% sangiovese and 10% canaiolo and was aged in small oak barrels for a year. The nose on this one was as big as any Roman ho

nker. Minty, spicy and a lovely woodiness at first, followed by loads of ripe black cherry and blackcurrant exploding out of the glass. Swishing it around my palate, I found plenty more black cherry, sweet spice and toasty goodness. It was clean and crisp with great length and an excellent bitter chocolate finish. The salami complemented the wine perfectly, highlighting the cherry. The finish was reminiscent of those alcohol filled chocolate covered cherries. And the cheese brought out the spiciness of the wine. Good stuff!

Chianti is definitely a food wine. It just works so much better when it has a foil to play off of, really showing it's complexity and versatility. After this tasting, I'm inviting it to my dinner table more often. 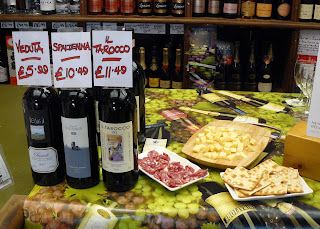 I agree but once you get a winning formula, people just want to jump on the bandwagon