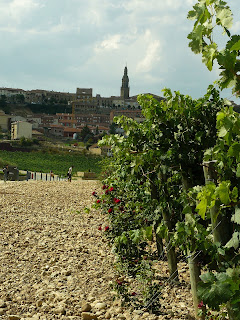 Rioja vineyard
On the plane back to England from the EWBC I was exhausted!! But what a weekend! I met loads of really great people, drank plenty of fabulous (and interesting) wines, visited some fantastic wineries, met the winemakers, had my eyes open to the possibilities out there regarding the web via the both the roundtable discussions and informal ones and generally had a blast. There was so much going on, I barely had time to catch my breath. But who'd want to stop with all the excitement surrounding us? The conference was extremely well organized and planned. It was such an exhilarating and febrile atmosphere to be a part of that I can't wait to attend the next one and I'm already planning on attending the USA conference in October.

(Gabriella getting an appreciative smack from Ricard!) 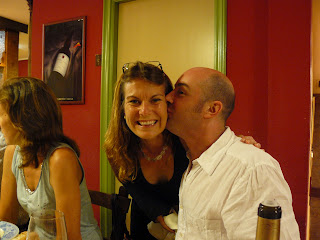 I have to give a HUGE thanks to the organizers, Ryan and Gabriella Opaz of Catavino and Robert Mcintosh of The Wine Conversation. And, a big shout out to Robert for his ability to get all us bloggers moving on time and in the right direction. I think I overheard him comparing us bloggers to herding cats but cats are much easier to direct!

The first night was the winebloggers invitational,whereby we each had to bring a wine that represented our area of interest or expertise. I had chosen an english rosé (made from the germanic variety, dornfelder) from the Chapel Down winery based in Kent, southeast England. What a reaction! That rosé definitely raised a few eyebrows and looks of disbelief. People had heard of English wines but those Continentals were rather dubious as to the quality of the wine. I found out later that not many had ever actually had the opportunity to try English wine before the conference.

Luckily, it passed with flying colours! I had tried it before I left so I knew that it wasn't bad but everyone else was surprised at the quality. I got quite a few positive comments from the others. So, score one for English wines! I think it convinced a fair amount of people that England is capable of producing quality tabl 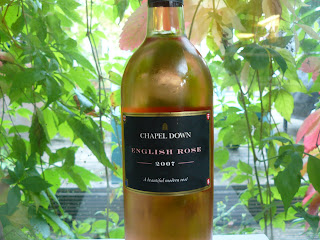 In case your wondering, here are my tasting notes for the Chapel Down English Rosé 2007:

A clear, pale, smoked salmon coloured wine. Upon pouring, the fresh summer smells of England seem to rise up from the glass. It reminded me of a summer's day after a sudden downpour in the park, you know, the clean scent of the air that follows a sudden rainstorm while your picnicking in the park (as so often occurs here) and after you've just run to the car and thrown everything in the backseat! Wet grass, a bit herby, red cherry and something akin to strawberries after they've been sitting in sugar and have gone all syrupy were some of the aromas that I detected.

It was however, quite dry and crisp. Plenty of fruit on the palate, strawberry tart with plenty of zippiness to keep it from becoming sluggish. There was also a hint of dill on the back of it and an apricot-like finish, which was quite long. I think this is a really great food wine, something to have with grilled salmon and boiled new potatoes tossed with dill. We had it with a hunk of mature english cheddar and bread and it was scrumpdiliumptious!

Thanks to Penny at the Bluebird Wine shop for recommending that one.

...and the english wine wasn't bad at all!
It's been a pleasure to meet you Denise, I' still recovering (from food, wine, travelling, etc.), I hope to see you soon again. Cheers from Justine too.

It was great to meet you both as well! I'm sorry I didn't get to see you before you left but we should keep in touch here in England. Let me know the next time you pass thru London. Cheers!