More from the EWBC '08, this time it's the Winebloggers Invitational and, to see me interviewed, check out the following link from VinusTV (click here) who were on hand to interview all us bloggers.

It was great fun to see what the other bloggers brought for us to try. There were wines from as far away as Canada (a rather intriguing attempt at producing cabernet sauvignon in that northern climate). The Spanish wine giant, Codorniu was one of the main sponsors of the conference and brought plenty of Cava as well as their new range of still table red and white wines for the first nights' event. I've tried them all before in London (see July 08 post) but that didn't stop me from trying them all again to see if they were just as good as I remembered them. They were!

I'm partial to sweeties and Thomas Lippert from winzerblog based in Germany (which is unfortunately for me, written in German) brought not only dry rieslings but also an icewine, which he produces. I spoke to him later about his icewine and he told me that they are only produced in exceptional vintages and that they usually have to pick on Christmas or New Year's Eve - such is the hardships of an icewine producer. His wine however, is definitely worth the effort. He brought along a 2001 icewine which was unctuous and sweet, like candy while at the same time with enough acidity to keep it well balanced. I love icewine and this one only reinforced my opinion.

Another sweetie was the Bodega Tintoralba Dulce, a red dessert wine. I was a bit sur 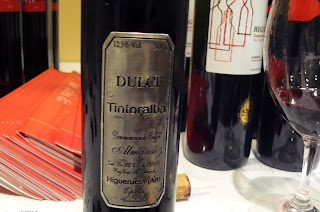 prised when I poured it as I thought it was going to be a white wine but any doubts were dispelled once I tried it. It was a delicious, red nectar, not cloying but nicely well balanced with plenty of boysenberry and raspberry in the mix. The wine is produced from over-ripened Garnacha Tintorera, a spanish variety which produces wines that are thick and deeply coloured. The grapes undergo carbonic maceration to preserve their delicate flavours and aromas. It was served chilled and reminded me of the red dessert wines from Rasteau in the Rhone valley.

The Portuguese were also well represented with some mouthwatering dry red wine on display. 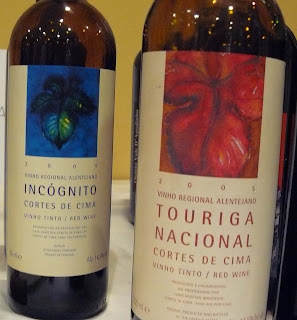 According to the website,the Incognito got it's name because back in the day, when they first started making and bottling syrah, it was still considered an "illegal" varietal in Alentejo. They couldn't call it syrah, hence the name, "Incognito." Well, this wine shouldn't stay hidden anymore. It was a fabulous full bodied example with plenty of dark fruits and a solid tannic structure to hang it's hat on. It was drinking well now but another year or two wouldn't hurt it.

The Touriga Nacional '05 was a bit softer and much more aromatic with lots of dark berries, black cherry and hints of toasty oak. Lots of soft tannins which made it go down nice and smooth and plenty of fruit without being overbearing or jammy. A definite crowd pleaser. 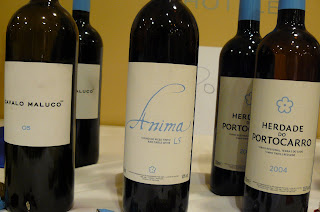 ught along some interesting Portuguese wines from Herdade do Portocarro. Of the three he brought, I enjoyed the Cavulo Maluco '05 the most. The Cavulo, was a fruity blend of Touriga Nacional, Touriga Nacional and Petit Verdot. It had an upfront oaky nose with black fruits and exotic spicy notes shining through. There was plenty of black cherry and ripe black fruits on the palate and it's definitely not for wimps being quite full bodied and tannic with notes of sweet spice and vanilla. It was a powerhouse of a wine while subtle at the same time, not over-oaked or over-extracted, but a very enjoyable wine to drink.
Posted by winesleuth at 9/03/2008 12:00:00 pm

It was a pleasure to meet you in that fantastic event.

Perhaps you ought to watch this interview during the invitational tasting. ;-)

Thank you for your kindness.

Wow that was fast. I couldn't avoid to see your comments about Cortes de Cima wines and find also that you really enjoyed them. Thanks for the good time and if you come by remember to pay us a visit. Cheers, José Eduardo

Thanks guys! Jose, here I thought that I was really lagging behind everyone and I still have so much more to write! I'm hoping to be in Portugal beginning of Oct, I'll keep you posted. Cheers!

Eduardo, I'm afraid to look!! Thanks!

I'm glad you liked the wines! The wine makers will be so happy.

Maybe we can visit them when you come over to visit us.